If you had told me, even a month ago, that I would not only willingly go to a brewery, but actually be the one coordinating the whole visit, I would have laughed in your face as I poured myself another glass of Pinot Gris. Beer was always the “last resort” drink for me, at parties and at festivals. In fact, outside of festival season, I cannot remember ever having bought beer for anything other than making a batter with.

But as it turns out, you cannot live in Cincinnati and not like beer. Sure, breweries like Rhinegiest and Madtree are mass producing crafts beers from the heart of the Queen City (and shipping to stores, including my local Kroger), but it’s the smaller breweries in the less gentrified parts of town, that are creating some of the most exciting libations in the Tristate.

Not surprisingly, the German heritage of Cincinnati plays a huge role in the brewing revival. A link to German immigrants is not uncommon for a Cincinnatian. In fact, by 1900, more than 60% of the city’s population could claim to be of a German background, which easily explains their love of bratwurst and sauerkraut and goetta (Google it) and, of course, beer.

So how did I, a die hard wine and gin lover, end up insisting on a private tour of a small brewery in Kentucky? By breaking out of my comfort zone! As mentioned, many local breweries can and ship to local stores, and while creating a “pick and mix” 6 pack one night, and seeing that the only available stouts (Justin’s drink of choice) hadn’t even filled half of the box, I read the label of every…single…bottle…and…can. Some waxed lyrical about citrus aromas or notes of peach. Some just listed the type of beer: IPA, Amber, Blonde. But in true Phoebe fashion, I went for the prettiest ones, and hoped for the best This strategy has cost me dearly in the past. On one occasion I had to explain to a miffed husband that “I didn’t realise it would cost $45 for a bottle of wine. But look at the label, isn’t it pretty?”

I digress. After filling up the box with the prettiest cans I could find, I had a weekend ahead of me to try the following:
– Wolf Pup
– Nellie’s Key Lime Pie Beer
– Crash
– Ride On

The stand out beer for me was, by far, the Wolf Pup IPA from California based brewery Golden Road. It is, as they claim, “refreshingly hoppy”, and “highly drinkable”. This is part thanks to the tropical notes that filter through with each sip, but also the use of Galaxy hops. Galaxy hops are featured in two of my other favourite beers- Rhinegiest’s Andromeda and Astro Dwarf.

Our visit to Wooden Cask was in part to open my mind and palate, and also for us to actually do something of a weekend. Having stumbled across the tour details online, we drove the 30 minutes down to Newport and started our adventure. Wooden Cask is, simply, a hidden gem. Large enough a space to warrant its own parking lot, but unassuming enough for you to easily walk passed it. It is just off bustling Monmouth Street, and a stones throw from the attractions and eateries of Newport on the Levee. Inside it boasts the Three B’s you’d really want from a brewery: beers (duh), barrels (of course), and board games (why not?!). We didn’t have time to break open the Scrabble, but after arriving a good 30 minutes before our tour started, we were able to sample some of their wares. Justin, as always, opted for a stout, and I went for their cider. “A cider?!” you cry. Yes, yes…I know…but you can take the girl out of the West Country…

Alex our bartender, as it turned out, would also be leading our tour, and suggested that we grab another drink for the ride. Justin opted for another dark beer- this time their Scottish stout, while I was good and had water. On the tour, which lasted just under an hour, we learned everything there is to know about the beer making process from the roasting/toasting of the barley, to how breweries have started using hops in pellet form rather than the actual flowers for a more accurate recipe (seriously, it looked like rabbit food but smelled like pure hops!).

The highlight for Justin was finally learning the difference between a porter and a stout, for me it was hearing an American properly pronounce “Yorkshire”. But what was so outstanding is the knowledge and passion for the process, and the industry itself, that Alex showed. A home brewer, but teacher by trade, he fell into his position at Wooden Cask, and is very clearly at home there. I joked that American’s have yet to master creating a proper cider akin to what I was used to in Wiltshire/Somerset, but he assured me that the brewery would be bringing out a cloudier, dryer cider towards the end of the year. As if we needed another excuse to return! 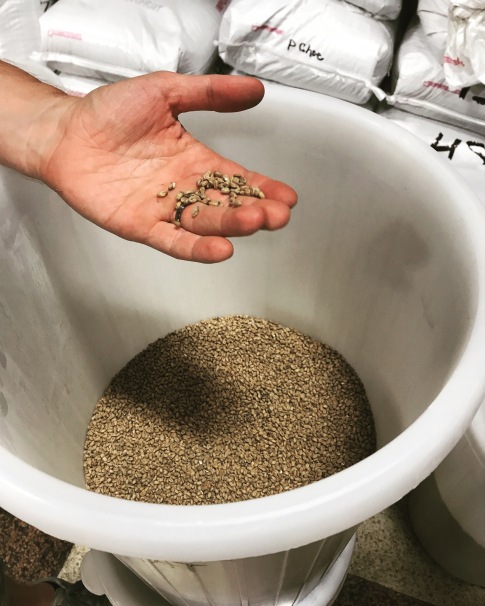 If you’re after beautifully crafted beers served by brilliant, knowledgeable staff, head down to Newport, Wooden Cask will not disappoint.