One glorious and convenient upside of living in rural Midwest America, is that you are completely surrounded by farms. Some, like the ones close to where we live, are dairy, or corn. A lot are soy bean. But the hidden gems are the multitaskers, the jack of all trades, the ones that provide a few seasonal products to the best restaurants in the Tristate. And Carriage House Farm is one of those.

Nestled against the hilly banks of the Great Miami River, Carriage House Farm runs parallel to an unassuming country road just to the west of Cincinnati, on land given to one Cpt. Joseph Hayes for his service in securing the independence of the nation way back in the 1700s. The management of the farm has always been a family affair, and handed down to sons and willed to daughters, and to this day, it is a father and son team that over see operations. Dick and Richard Stewart run a farm that not only produces grain and organic vegetables, but through their beekeeping endeavors, a range of artisanal products and honey are being sold at an ever expanding selection of restaurants, delis, and local markets.

This past weekend, the Stewarts threw open their (barn) doors for the 8th Annual Farm Tour & Local Food Open House. By way of hay ride, we were able to explore the farms footprint, wander about the vegetable gardens, and even bear witness to their expansions and renovations. Invited, as always, were some of the restaurants that the farm sells to, including MWNS favourite Metropole at 21C, Maribelle’s of Oakley, and Via Vitae on Fountain Square. In the pavilion, a make shift farmer’s market was set up, where we found, among others, Sixteen Bricks Artisan Bakery, and Chocolat Latour, as well as my local food bible, Edible Ohio Valley. I even discovered pawpaws! My garden backs on to an unkempt wood that has pawpaw trees, but until last Sunday, I didn’t know what the fruit looked like, or what a diverse a product it is. At $2 a pop, we shied away from buying the whole punnet, opting to buy one and savour the experience. I have since ventured into my woods and found it to be a pawpaw gold mine! But more on that at a later date. 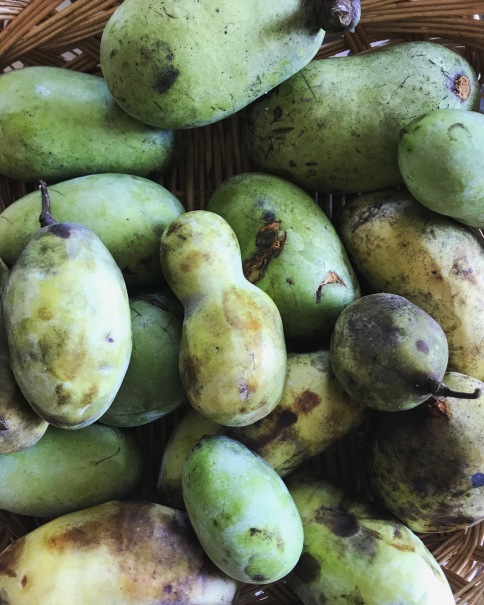 Upon arrival, we were handed our maps and sporks(!), and offered a freshly picked apple. It has been some time since I walked around a garden, eating something that it had offered up, and as the wood smoke from further up the hill filtered through the browning leaves and the buzz of bees filled our ears, we were the epitome of content. Stationed next to check in, under the ancient gnarled oak trees,  was Metropole who offered an aubergine salad with quinoa and cherries, a dish that save for the quinoa, was grown mere feet from where we stood. Further down the dust road was the Midwest Culinary Institute, who served a hearty bean stew with corn bread and a kicking jalapeno and red onion relish. We skipped the sweet treats they had on offer, a chocolate brownie and a citrus jelly- which I deeply regret. I am a sucker for a citrus jelly! 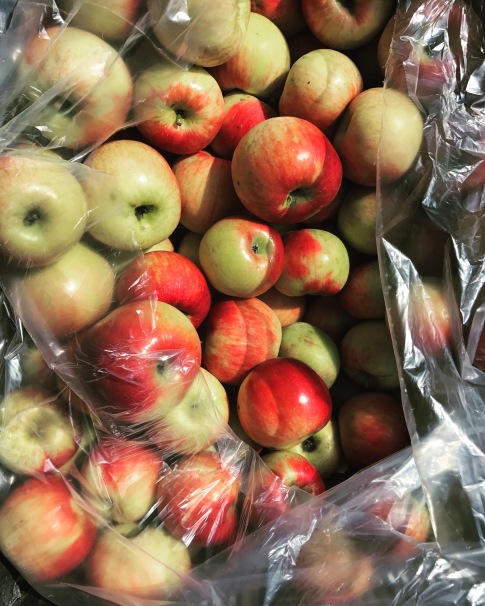 The aforementioned hayride took us from the main farm, down to the stables and on to the new barn which is still under construction. Inside we found Watershed Distillery (purveyors of our all time favourite gin) offering up a selection of non-alcoholic (boo) cocktails in partnership with Mad House Vinegar. Admittedly, I avoid vinegar to the best of my ability. Salt and vinegar crisps aren’t a feature in our house, and ever since I drowned, then devoured, some chips in malt vinegar at my 8th birthday party, I rarely use it in my cooking. The smell alone gives me horrific flashbacks. But, being the brave souls that we are, and loyal to the local businesses we love, we chose the “Peach Shrub” (him), and the “Asian Pear Shrub” (me). It was then that we discovered that malt vinegar has no place in cocktails, unless hidden behind a wealth herbs and spices, as done in the latter of the two drinks. There was an inordinate amount of vinegar in the “Peach Shrub”, to the point that it was all you could smell or taste. The lack of liqour in the mix was blindingly obvious, and we racked out brains to think what spirit would actually work well with such a pungent ingredient. The “Asian Pear Shrub” was delicately flavoured with lemongrass and well selected berries, and with the addition of coffee vinegar, you weren’t ever going to be overwhelmed with that acidic stench of malt vinegar. It was a deliciously refreshing drink, that aided in cleansing our palletes before diving into the next round of dishes. 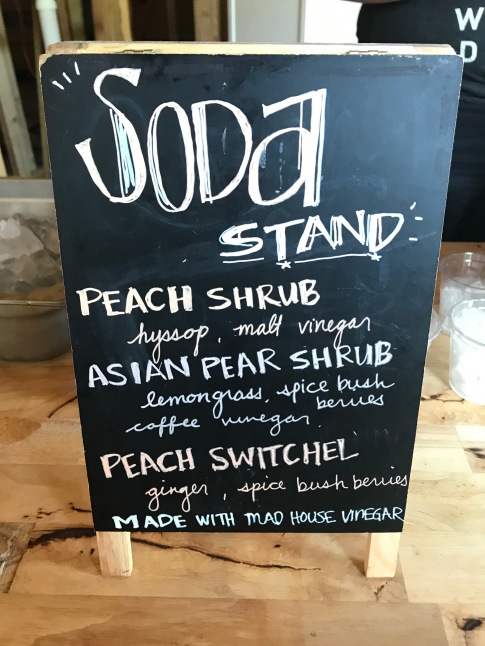 Maribelle’s has been hovering in my top “must visits” for some time now, so I was filled with childlike glee upon seeing them on this list of attending vendors. Overlooking the land set aside for orchards (including the Asian Pear featured in the Watershed mocktails), we gobbled down their apple chutney salad before getting our hayride back to the car. It is a beautiful piece of land, expertly maintained, and a real joy to visit. If money wasn’t such an issue, we would be back over the next couple of weeks for one of their Farm to Table sessions, where local chefs create seasonal menus in conjunction with the farm, and to quote them “each dinner will reflect the personality of the chef in charge and the seasonality of the ingredients available on the farm. Thirteen guests will enjoy an intimate meal of multiple courses on Carriage House Farm’s open-air dining terrace. Chefs will prepare the food on a wood-fired oven and grill in full view of the guests.” My literal idea of heaven.

What I enjoyed most about our visit to Carriage House Farm was something quite abstract. It was how much pleasure I got out of seeing local food prepared well and with thought. Last night when I was regaling Justin with some of the historical facts about the farm, he mused that our generation is steering itself back to how our ancestors lived. While they had no choice but to grow and tend to crops and gardens for food, nowadays we choose to buy local or grow things ourselves. But why? Is it the certainty of knowing where something came from? The guilt of ludicrous food miles? Are we more conscious of food seasonality and how best to honour those seasons? Is it the secret hipster in us? Whatever our reason, we want to continue buying ethically and locally sourced products because it is the right thing to do. I don’t want garden peas out of season, I want them fresh out of the pod and not perfect. I don’t want identical spears of asparagus at Christmas- give them to me dusted in mud in the middle of May!

I thoroughly recommend discovering your local farms, and working with the seasons and farmers to get produce at it’s best. If you’re a Cincinnati reader, be sure to visit the farm at their next open house, or book your ticket now for dinner.

One thought on “CARRIAGE HOUSE FARM”