Tennessee in October is one of the most beautiful things in the world, and I’m so excited to have two trips to this great state planned this month. My first visit involved eating almost every food item available throughout the Dollywood Resort and Dollywood Park, and you know what? It was the most awesome couple of days! From an elbows-on-the-table dinner with no silverware(!) at Dolly Parton’s Stampede to some exquisitely designed and baked desserts at the DreamMore Resort it was a wonderful 2 days spent getting to know the variety of sweet treats and delicious dishes available across the park.

It would really hard to post about everything I ate, and it was difficult enough to narrow the list down to just 5 things to try, but here’s my top 5 things you need to try the next time you’re down in Pigeon Forge!

I’m kicking this post off with the world famous Cinnamon Bread, available fresh every day at the Grist Mill Bakery inside the park, and now at the hotel too. What first gets you is that rich, luscious smell of brown sugar and cinnamon that wafts out of the bakery and up and down the parks Craftsman’s Alley district. I was lucky enough to time my stop at the bakery to see a batch of bread being made, and I don’t know what made me happier, seeing the dough being dunked into a vat of butter before getting a brisk rub down in a bowl of cinnamon sugar, or being handed an entire (baked) loaf complete with servings of icing, apple butter and their seasonable pumpkin spice icing. Out in the sun, the group of bloggers I was visiting with, all tucked into their own loaves, sitting in silence, beaming from ear to ear that we were lucky enough to get fresh out of the oven cinnamon bread. The bread is soft and doughy, and the “crust” is almost like popping candy thanks to the sugar crystals baked in to the top of the loaf. It’s similar to monkey bread in texture, but the taste and smell is like nothing else on Earth. I’d like to say now, that they should learn to bottle the scent up and make candles with it so we can reminisce when we’re back home, miles away from the tastiest bread ever invented. 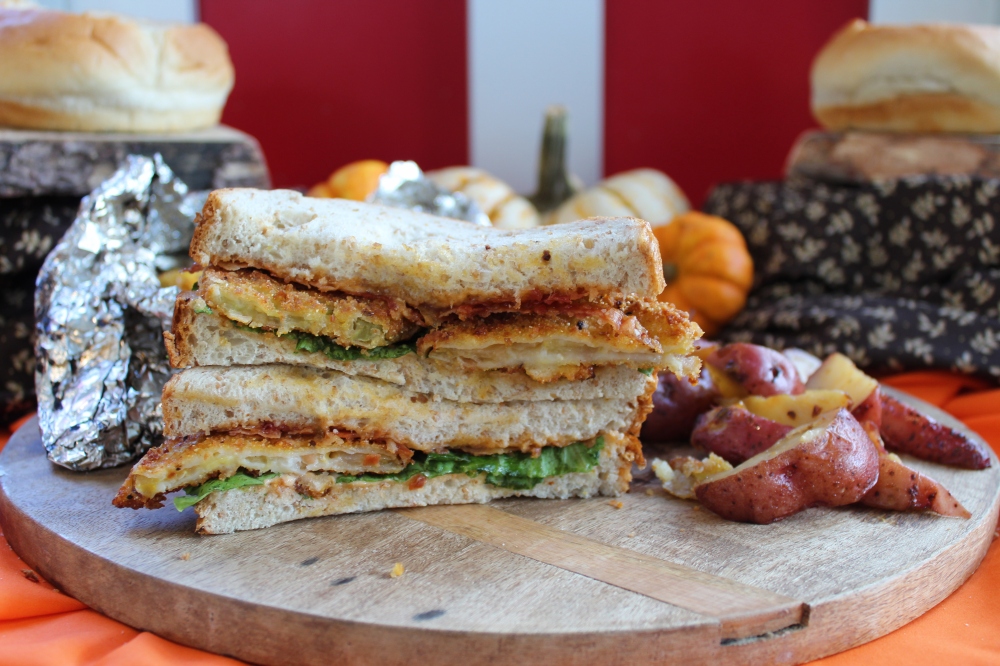 Much like PB&Js, I believe that BLTs should not be messed with. They’re both classics, in part because of their simplicity, and part because the ingredients work perfectly together. With BLTs, you have the crisp, salty bacon nestling in with the juicy tomatoes and fresh lettuce. Some opt for a bit of mayo with theirs (I’m firmly in that camp), but I’ve heard of people going for ketchup, mustard even Marmite! One condiment I’ve never tried, but will now make a point of ALWAYS having with BLTs, is a spicy ranch dressing. But it’s not the ranch that makes this sandwich so darn tasty, it’s those green tomatoes. The crisp coating is fried to perfection and the added crunch from the bacon make this version more substantial and far less wet than your average BLT. The sandwich is perfectly seasoned, not overloaded with ingredients and incredibly moreish. I could have easily finished off another two or three of these, so you’d better believe I’m counting down the days until I can get back to Dollywood for another. 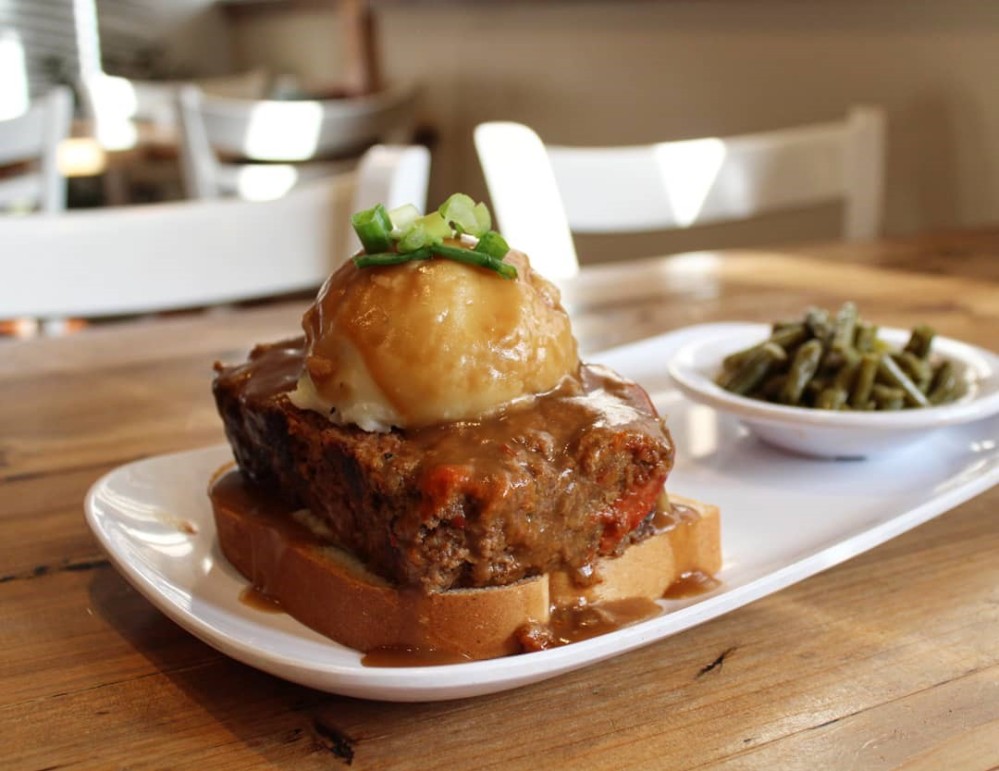 There are hundreds, maybe even thousands of American foods that I have yet to try. I’m sold on Toaster Strudels, I’m personally keeping Twizzlers in business, and if you follow me on Instagram, you know I am a HUGE Dunkin Donuts fan. But it’s the traditional American meals that I have been slow to try. Thanksgiving has introduced me to the wonders of sweet potato casserole and pecan pies, but save for that one day, I don’t get round to eating much traditional American fare. So I jumped at the chance to try meatloaf. But this isn’t any ordinary meatloaf. This “stack” is a skyscraper of a dish, piled high on toasted bread, topped with a hefty helping of mashed potatoes. Served with country style green beans, it is pure Americana and pure comfort food. You can find this dish, along with other home style staples such as turkey dinners and cabbage rolls at the Front Porch Café on Show Street. 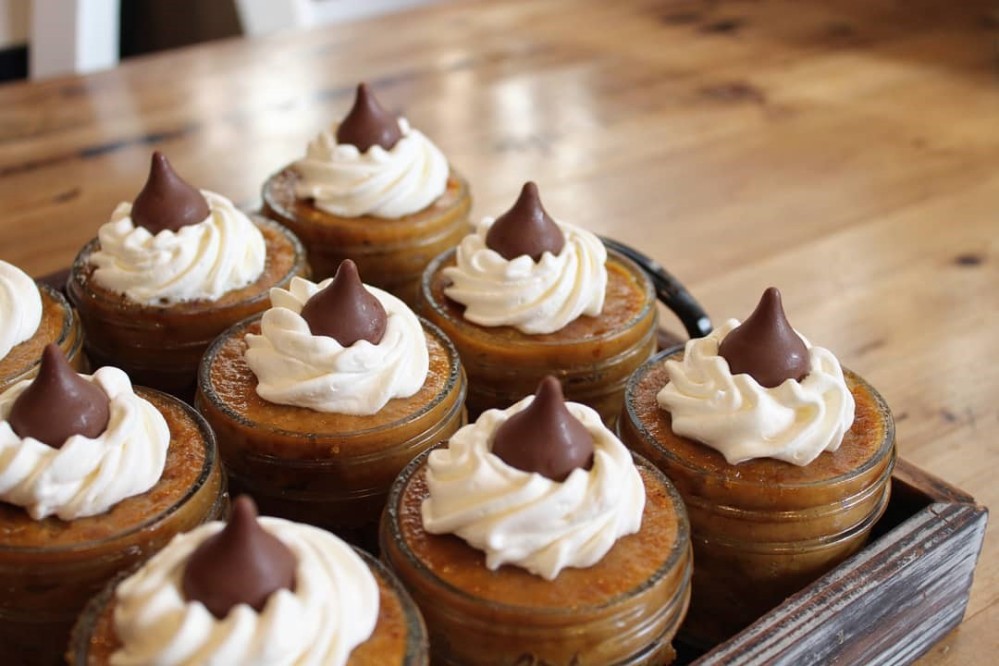 Let me be honest with you for a second. I don’t like reality TV shows, I’m not too bothered by avocados and I hate pumpkin spiced lattes. I don’t think I’m a millennial at all! The whole pumpkin spiced “thing” has gotten out of hand here in the US. I swear I saw pumpkin spiced baby wipes at Walmart last week, and I’m sure somewhere in a dimly lit basement office, some pencil pusher is designing pumpkin spiced deodorant! It is an epidemic. But here I am, writing about how incredible a pumpkin spiced dessert is! This unique twist on the French classic, is packed full of autumnal flavour and is the perfect post-turkey-dinner treat. The heat of the cinnamon and nutmeg is perfectly balanced, and unlike some other pumpkin desserts I’ve tried, isn’t lumpy. The swirl of whipped cream and cute little Hershey Kiss makes for an adorable little treat. This dessert is only available during the Harvest Festival (Sept. 28 thru Nov. 3), so head hurry down to Front Porch Café as soon as you can!

If you’re looking for a comfortable, convenient, beautiful place to stay in Pigeon Forge, look no further than the DreamMore Resort and Spa. Rooms boast either stunning, unparalleled views of the surrounding Smokies, or across the remarkable landscaped grounds, and are perfect for couples and families alike. The shuttle bus to Dollywood is a really useful service, taking you door to door in a matter of minutes, meaning you can come and go to the park as often as you’d like during the day. Other fantastic services include fireside bedtime stories, s’mores making under the stars, gift pick up and delivery (straight to your room!), even small things like booking tickets to Dollywood shows before you leave the hotel helps make your stay an easy one. Of course I just happen think the food is the best thing about this place. I had the pleasure of dining at Song & Hearth during my last visit to TN, and I was so happy to have the time to sit back and enjoy the restaurants breakfast menu. The extensive menu includes Southern staples such as waffles, and biscuits and gravy, plus the usual fare such as muffins, Danishes, cereals and the crispiest bacon ever! I opted some heart shaped waffles (so Dolly), biscuits and gravy, bacon and a side of fruit salad. I spotted a few guests tucking in to donuts fresh off the donut wall, omelets made fresh, and if I didn’t have to pace myself for the rest of the food I was tasting that day, I could have easily killed 2+ hours making my way through the buffet. In fact, given how time slows at Dollywood, and how the pace of life in the Smokies is far more leisurely than that of city living, I could have wiled away an entire day with my plate of biscuits, just hanging out on a porch swing watching the leaves change. After all, there is no better place to be in October than in Tennessee.